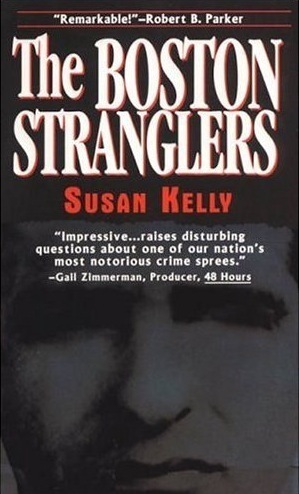 Since I’m incapable of writing good synopses of my own books, let me quote from the dust jacket of the hardcover edition:

“It was the Watergate of murder mysteries.

The Boston stranglings, in which eleven women in eastern Massachusetts were horribly murdered between June 1962 and January 1964, made front-page headlines around the world. ‘It was,’ says a woman who lived through the terror, ‘as if Jack the Ripper had come back from the dead to stalk Boston.’ And indeed, the Phantom Fiend, as the newspapers christened him, would go down in crime history as one of the world’s most notorious and feared killers.

The Boston murders have long been thought to be the work of one man, a construction worker named Albert Henry DeSalvo, who was represented by high-profile defense attorney F. Lee Bailey. This belief, the author now reveals, is not true. The slayings were, in fact, the work of at least eight—and possibly as many as eleven—individuals, none of whom was the luckless DeSalvo.

The Boston Stranglers examines the entire case, demonstrating convincingly that DeSalvo was manipulated into confessing. The book describes the motives of those who convinced DeSalvo to confess. And they found a willing victim in DeSalvo, who had a desperate, perhaps even pathological, lust for celebrity.

The book does not simply exonerate DeSalvo and expose those who put into gear the machinery of this giant hoax. It sets out to solve the murders to which he so willingly confessed.”

Although the hardcover edition of The Boston Stranglers is out of print, the book is available in an updated paperback edition.

The Boston Stranglers
“This book is, quite simply, remarkable journalism and remarkable writing.”
--Robert B. Parker


-- Barry Reed, author of The Verdict

The Gemini Man
"Susan Kelly's maiden mystery is fresh and free-spirited with lively characters, snappy dialogue...and a suspenseful plot." -- Washington Post
And Soon I’ll Come to Kill You
“Spinetingling... noteworthy... brings the horror of being a victim into sharp focus.”
--Publishers Weekly
Out of the Darkness
“Thought-provoking... a gritty, bittersweet story with added depth and dimension.”
--Publishers Weekly (starred review)
Trail of the Dragon
"A page-turner with action and suspense." -- SSC Booknews
Until Proven Innocent
"A winner for fans of literate, witty mysteries." -- Tony Hillerman
The Summertime Soldiers
"The Summertime Soldiers has love, sex, and murder and most of all, a heart." -- Boston Herald